By continuing your visit to this site, you accept the use of cookies. These ensure the smooth running of our services. Learn more.

Former Smiths frontman Morrissey has waded into the row over the

Falkland Islands telling the audience at an Argentinian gig that they

The singer, who counts Prime Minister David Cameron among his fans, made the remarks during a 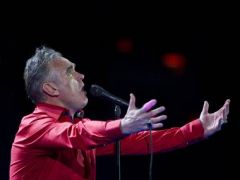 He said: "You know of course the Malvinas Islands, everybody knows they belong to Argentina so please do not blame the British people, we know the islands belong to you".

He is the latest in a line of celebrities to voice their opinion amid heightened tensions between Britain and Argentina over the islands, which led to the two nations going to war in 1982.

Earlier this week, former Pink Floyd star Roger Waters said the islands should belong to Argentina, according to a TV presenter who interviewed him.

Chilean host Amaro Gomez-Pablos claimed 68-year-old Waters made the comments in an interview.

Waters has taken a strong anti-war stance for many years and aired his opposition to the Falklands War in Floyd's 1983 album The Final Cut.

Last week, US actor and director Sean Penn aired his views on the subject.

He said the UK should join in UN-sponsored talks, adding: "I think that the world today is not going to tolerate any kind of ludicrous and archaic commitment to colonialist ideology."

Morrisey in "performer tells audience what he thinks they want to hear....shock" !!

Who gives a crap.

On the map, I notice that the Falklands are an awful lot nearer to Argentina than they are to Britain.

Similar sort of distance as the Isle of Wight, or the Isle of Man, is to mainland Britain.

Like most English born people living in Buenos Aires i also know the Malvinas are Argentine.

You live in Argentina and you accept (not "know") Argentina's claim to sovereignty over the islands. OK, That's absolutely your right.

The Falkland Islanders live in the Falklands and they "know" something different: That's absolutely their right.

Allow me to correct an inaccuracy in the article...

Morrissey doesn't count David Cameron as a fan... He actually discounts him as one since he's said that he bans Cameron from liking The Smiths.

I don't recall him asking the British people before speaking for us.

Like most Lefties who have done well out of the 'Arts', he has a nice large house.

It seems that some socialists are more equal than others - I don't know why people listen to their politics.

For all the celeb's the issue on the Falkland Islands is one of ' Self - Determination '.

These opinionated and badly informed declarations are quite pathetic, and only make these celebrities look like fools.

Mozza, stick to the music and have a nice Argentinian steak while you're out there.